on a surf fishing expedition 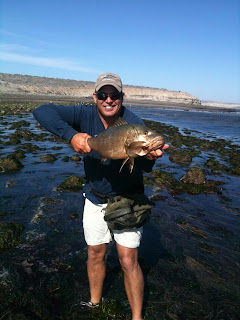 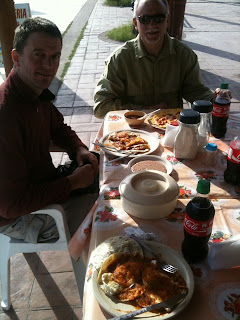 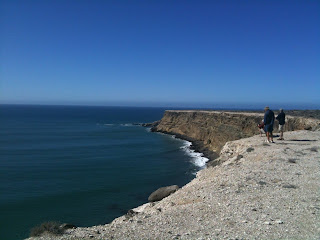 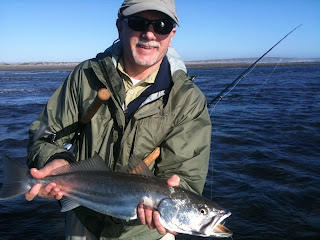 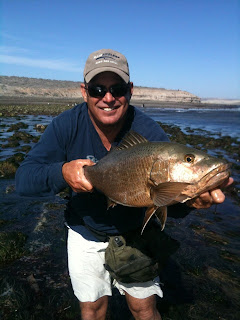 Hi Folks,
I am sure you are wondering, where the heck is Grant? I havent seen any posts, whats that crazy Gringo up to? Well, I am up on one of my fishing Safari's with Sam Vigneri and Jeff Currier..
The trip started off kind of crazy. We were supposed to go after snook on the fly, but big waves came in and took out that option... So we packed our bags and headed north for one of my famous fishing safari's.
The frist day was nuts. We came to one of my favorite fishing holes and the wind was blowing at least 30 mph. Sam gave me one look and I could tell he was thinking, lets get the heck out of here and take the next flight home. Jeff is like me and said, Grant stop the truck, I want to fish.
The Pacific was like a washing machine.. Wind, waves, spray, all coming together over the reef.
Jeff and Sam went to fish in the lee of big sand hill, but I went right into the storm. Things looked good to me, we had an incoming tide, and it was washing over the rocks. First cast with the spin rod and wham I got hit hard. The fish broke my leader off instantly. Crap, what a big fish, wonder what it was. I tied on another lure and cast again, but this time brought it in quickly. The water turned red with fish... SNAPPERS!!!
Here I am, on a reef in a howling windstorm in the middle of Baja and the fishing is nuts. I brought the next fish in, maybe a 10 to 12# snapper and the whole school followed him up. I called Sam and he saw me catching fish and came over. First cast with his fly and Wham, broke one off. New fly next cast, wham another snapper on. Sam was all smiles and he forgot we were fishing under not so great conditions..
Did I mention there were rocks. Well we lost most of our fish to rocks... there must have been 50 snapper in a 200 square foot hole in the reef.
Crazy fun.
The next day the wind died down, and we traveled 2 hours down a desert trail to get to a new fishing spot and it was worth all the effort. It was non stop action on Corvina. Sam was all smiles. We even caught 8# halibut.
Internet is only available here at a small taco stand, so I will keep in touch when I can..
I do have to apologize. I had some photos from the guys I was supposed to out up on the blog before I left, but I got caught up in getting ready for the trip. I will post them when I get back on Monday.
In the meantime, I will keep you posted.
Tight Lines,
Grant
Posted by Baja Grant at 7:23 AM