So that night we met up with the Italian's for dinner.  These guys were so much fun.  Just crazy guys fishing, laughing and enjoying life.. I mean way too much fun was had.
We got along great, so they asked us to follow them to the Lemay river about 2 hrs away.
We were going for just an overnight trip and ended up staying 3 days…
The first afternoon Gisel and I walked along this 200 yrd stretch of water.  There were fish up to 30" rising everywhere..  I have never seen so many big fish rising.  Only in Argentina.  I tried every fly I had and couldn't figure out the hatch, then I saw a brown drake come off the water and I had two of them in my box.  of corse I was shaking as I tied on the fly, and I ended up catching 6 nice Rainbow trout up to 20" but not one of the bigger ones.   These fish were super powered fish and fought 3 times as hard as any trout I caught in the US    No bellies on em at all, juts strong footballs.  They fought like super charged steelhead.  One of our Italian Amigos did catch a 30" rainbow, and it was spectacular.
The next day, we ate out at the local Resturant Malbec.  Its owned by another crazy guy named Gabriel.  Gabriel is originally from Croatia and just was so much fun.  He presented us with the finest wine we ever had and along with European fish league we had one too nay bottles of wine..  The next day Gisel and I didnt get out on the water until 3 pm.  Of course the guys were out early..  Gisel and I kind of sat that day out on the rivers edge on a blanket n a bottle of Malbec…The guys killed it on dries early in the day, but the afternoon was slow.  We watch an amazing sunset over the river.  what a wonderful day and wedding even wet a line.
The next day Gisel and I did a float trip.  It was our only float trip we ended up doing.. Of course on the first bend of the river, I stepped back and lost my balance.  This surfer must be getting old.  As I lost my balance, I sat down on the Platoon and whoops my feet go backwards over my head.  I looked at Gisel sad said in Spanish.. "Ya mi voy"  Here I go and fell backwards into the water.  of course I had my iPhone in my pocket.  I had a defective waterproof case, so my phone drowned.  Man, was I pissed.. Mostly because I made it defective, trying to clean it..
So the guide pulls over the raft on a sand bar for me to dry out and cool down.. He asks of he can cast my Hardy 8wt, and I say you bet.  But then thinks second thoughts and I say no problema if you catch the big fish of the day.  He just smiles and on his 3rd cast lands the most beautiful brown trout ever.  He was apologetic and I was just stoked that he landed it.. of course I didn't have my camera, and he didnt use his.
Now this fish wasn't just a ordinary 8 lb brown.  He looked more like an Atlantic Salmon and he was built round and strong.  No fat on this guy.  He jumped about 6 times 3 feet into the air, and fought like no there trout I have ever seen.  I was impressed.. Really these fish are amazingly strong..
In the next hour Gisel hooked and lost 3 really big fish.  She just couldn't strip fast enough to stay on.  Lots of water coming down this river.. So I amin the back and alls I want is Gisel to get a big fish.  But I lazily cast my big black n purple spider fly and a 4 lb brown trout eats it… There he goes, up in air everywhere at once and puts up a great fly.  He looks way smaller in the picture but he was at least 4 lbs.  I am sticking to that story.  these fish had weight in girth more than length and again were spotted more like Atlantic Salmon than trout.  Amazing fish.
We had dinner one last them with our Amigos and Roberto was telling me about the 20lb brown trout he caught there last year..
The French and Italian guys made our trip so much fun, and we still miss their laughter and smiles.  So a huge Thanks to them, and we hope to see them again!  Bonne Chance  Amigos where you go! 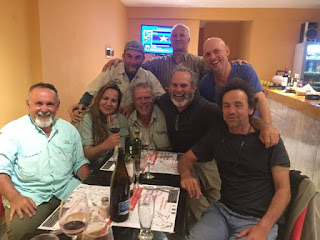 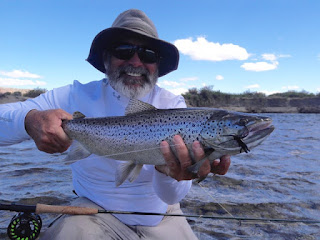 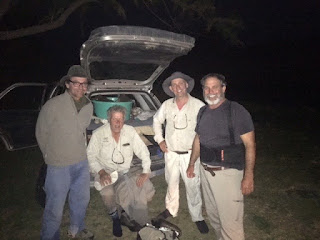